I’m feeling down and shit is starting to sink in a bit.  Not that the plight is dire, just that somewhere an ego is bruised and I wonder if I’m going to make the same choices.  I’m terrified of that.

I lost my job in 2010.  Reza was almost four.  It was a particularly formative period that was marred by the self-doubt, immaturity,  and rationalizations of the man in her life who swore to be her supporter and protector.  (I’m getting a bit down on myself, but it’s ok, I gotta work through this.)  Instead, I drank a lot.  I piddled away trying to learn how to make music.  In fact, heh, the irony is not lost on me:  Just the other night, I was listening to a re-recording of a song I wrote during that year and a half, a song about her.  Ivonne teased me, asking me how often I listen to myself; it was a small green sprout from a land where crops are just starting to be sown again.  It felt nice.  But I digress.

I’ve spent the last day and a half fielding messages from previous coworkers and members of my team, all incredulous.  I haven’t the heart to tell them that I face crippling self-doubt that I may have deserved this, even though I know in my heart of hearts that there was no way to avoid this particular fate.  None.  That’s not hubris or assuaging of one’s ego, that’s the bare truth, naked to all eyes. I knew this was coming.  Still, I question.  What could I have done better?

I know those answers.  And when I look back on this in a few years, from a different place, it’ll be enough to know that I didn’t want to give what it would have taken to keep this job because I know now what I knew then, that it wouldn’t be worth that effort, not for this ignominious end.  Does that mean I’m weighing my family’s future against my own work ethic?  If so, how do I prove to myself – and to them – that my innate nature was correct?

These coworkers, these work friends, my team.  They wore black to work today in solidarity.  For me.  That meant a lot.  It was a small gesture and it’ll be forgotten in time, but for today, for tomorrow, when the leadership group will sit in that banal training room and be told the company line, it will be more than a bit vindicative that there will be a portion that will have questioned the wisdom of this move.  Seeds will have been planted; others will take root.  Others still will bloom and float away.  All in their own time.

But this fantasy, this not-so-secret desire for martyrdom needs to stay here, on these pages.  The real world awaits, outside the greenhouse of that toxic garden – and I find myself, for the first time in a long time, ready and willing to accept what will come.  The question is whether I will squander the same opportunity I once had… or will I own this moment.

I have a healthy fear of relapse.  I think about it in waves.  Sometimes it’ll be on my mind for two or three days, then weeks will go by before I can recall the last time I thought about having a drink.  I haven’t thought about it at all through this, except to remember what I did last time.  I feel a lot of shame for that.  But I’m not that person anymore and I won’t torture myself to recall my shitty behavior – but I wasn’t much of a dad then, nor a husband.  I was so self centered, so able and willing to wallow in my false sense of indignation, and if it didn’t feed those destructive animals, it wasn’t worth my time.

I’ve wanted to tell Ivonne how much I regret taking that stance back then; it really wasn’t that long ago, but it seems like a different life.  But I’m holding the space that we both need right now to continue to sow our seeds.  I think she knows, and I think there’s a real part of her that, while she remembers what it was like, isn’t worried that it’ll become that again.  I’m more than thankful for that.  Had this happened two years ago, different story.  Fuck, I’m glad it didn’t.

But without that chemical layer to hide under, I face harder and harsher realities than self-aggrandizing notions of doing what needs to be done to support my family, thinking that’s the measure of my part, my role – to check the box and kick back playing video games.  That’s not how this works.  That’s not how being a human works.  I clearly see the crossroads in front of us, in front of me, the opportunity to peer into the distance – away from the fog of instant gratification – to see the long game.  Which direction does happiness lie?  What are my options?  What do I want?

Because of that, I have a healthy fear of relapsing into ennui, of mailing it in once again and expecting a medal for minimum effort.  I want to work hard toward fulfillment and growth, toward the moment when I can look back with confidence and security that, while I was just as imperfect as the humans next to me, I did the right things, the good things, and I’ve made the right choices – regardless of what they are.  Because make no mistake, future me, all the choices in front of you are good ones.  Right ones.  Because you fear.  Don’t forget that.

The next brick in this structure is the one that becomes the cornerstone to that which will become your legacy, your mark on the world, the moment when you can look at your wrinkled face and thinning hair with the confidence of a life well lived.  We must, at some point, be willing to embrace the possibility of success, when success is defined only as making the journey.  Step.  Just… just step.  There you go.  One more.  Then another.  See, they build on each other and they become a path, a compass heading, a place of newness, growth, and self-actualization.  This is the time to grasp what that should be in order to be satisfied in the journey.  Because, don’t kid yourself:  The road you are about to travel, no matter which route you choose, will not have been the one you expected.

I don’t feel so down anymore.

I told my oldest friend how much he means to me today.  I needed to say it.  He needed to hear it.  I walked into the kitchen and wept. 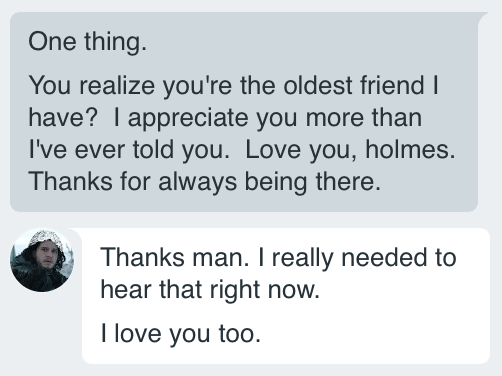